Article in the Gwinnett paper. 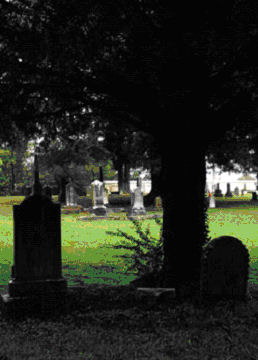 DULUTH – Sherry Ingbritsen had walked into the darkened New Dawn Theater in Duluth alone one night when she felt a slight, cool breeze gently blow past her.

“As soon as I felt that there was just this brush of white light that went in front of me,” she recalled. “It looked like something walking past.”

When Ingbritsen turned to examine the light, there was nothing to see.

“It kind of threw me for a minute because I didn’t know what it was,” she said.

Not having turned on any lights inside the building yet and having closed the door behind her, Ingbritsen, one of the original founding members of New Dawn Theater Company, said the source of the light couldn’t have been a blown light bulb or anything from outside.

That experience and those of other members of the theater company – particularly voices heard in the building when people were alone – prompted a paranormal investigation earlier this year.

Ghosts of Georgia Paranormal Investigations spent a night inside the building recording audio and video in search of answers to the yet unexplainable occurrences in the historic building.

One of the tactics to elicit a potential ghostly response is simply asking questions.

“On several questions, we got a response,” said Ingbritsen, who participated in the investigation.

Larry's talk at the Stauton Library

Article that was in Atlanta Cuisine Magazine (http://www.atlantacuisine.com/). 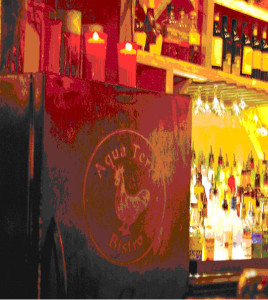 in the night at

Buford – “I think we should setup base right here,” says Ed

Laughlin, pointing to a small two-top near the front door of Aqua

Laughlin, founder of a local group called Ghosts of Georgia

Think TAPS, minus the tattoos.

investigator and sensitive, gleefully calls out to the rest of the

group, while previewing a series of pics she took moments earlier

with her digital camera.

“I’m usually not fond of orbs,” she explains, “But this one

is pretty impressive.” Her eyes fixated on the camera’s display

captured a light-emitting orb hovering over the dining room.

This group is the real deal, arriving with infrared video cameras

feeding into a high-powered DVR. They’re heavily armed with

all sorts of gadgets and gizmos, including an impressive arsenal

of audio recorders, and even electromagnetic detectors (EMF and

K-II meters) to measure any renegade electromagnetic pulses that

might be floating around the walk-in cooler, or elsewhere.

Having joined Laughlin on two other investigations in the past

(with a different group), I was impressed with his professionalism.

Three years ago, we investigated Hot Dog Heaven in Woodstock,

after receiving numerous reports from the employees of buns

flying off the shelf and kitchen equipment turning itself off.

during the investigation. This time around, I thought it might

be interesting to show you the findings of the investigation as

Things go bump in the night at one Buford bistro 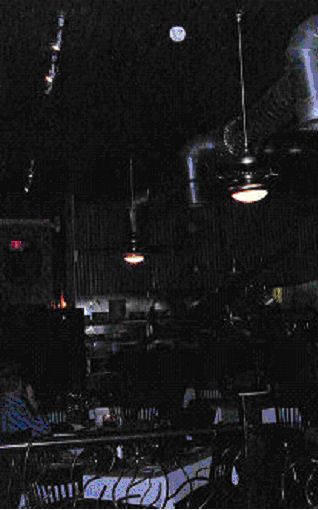 of paranormal activity at Aqua Terra-Bistro in

feelings by different people in the basement,

glasses flying off the shelf hitting the floor at a

distance away, tip money missing from a jar only

to be discovered across the room stacked neatly

at the top of the stairs, and unknown voices being

time and in good condition for a building of its

age, built circa 1870’s. All utilities were in good

ceiling, and floors, were sturdy with very little

floor squeak. Windows and outside doors were

Before we began the investigation, Beth, Corey,

and Christine did a sensitive walk through and

base temperature/EMF readings at 11:00 pm.

No unusual readings were noted, however, some

unidentified noises were heard, and a couple areas

in the basement seemed to have peaked the interest

of the sensitives. While Beth was standing in the

serving area of the basement (an area of interest),

the overhead light turned off for no reason. Corey

to come back on.

2.0-3.0 (normal for kitchen/storage area with lots

coming back into Basement 1 area from the

storage area. Ed heard the same sound, and was

walking behind her. EMF readings still .0-.4 – Did

not find source of sound. Recorded voice on audio

12:10 am – Compressor from drink machine

heater room and around Ed. Tom heard lots of

whispering sounds around pipes and such at the

clinked together) – went upstairs and verified

nobody was moving around glass or was in the

kitchen. The kitchen was above the team and while

investigating to find cause of noise, we tried to

reproduce it by tapping glasses together along with

other utensils in the kitchen, unable to reproduce

Prior to leaving the area we had the other team

walk and run above us to try and reproduce the

running sound heard, could not reproduce the

glooming during some parts of investigations

feeling when she investigated the second floor of a

previous investigation at another location.

sound by the back wall door – Ed checked it out

and feels it may be the vent. The A/C was running

and an occasional ticking sound could be heard

K2 while sitting on the table in the middle of the

lights like crazy sitting on the table during EVP

session. Base readings in the area registered .01-

02 Miligause. The K2 seems to be responding to

questions and communicating with the team.

unexplained would respond by moving the lights

on the K2 to yes and no questions. Through a

series of questions we have concluded that it is a

man over 50 that was scared.

the K2 responded with lights to his questions, but

communicating with a spirit.

with the lights to yes and no questions again.

We stayed in one spot to let the spirit continue

talking to us until it stopped. Average temps

and EMF readings other than the spikes during

around with us and continuing to communicate

and down to Basement 2.

1:11 am – K2 started communication again and

was letting us know he was walking with us

through yes and no answers we were getting.

Average temps, and EMF .1-.3 when not spiking to

Ed got a sick feeling, nauseated, and Tom hit cold

spot. K2 started spiking again while they stood in

one spot and Beth was holding K2. Also picked up

EVP’s at the same time.

the lights on the K2 to drop the temperature on his

thermometer and it seemed to respond by dropping

minutes standing in the same position and

area of the room.

upstairs, believe it to be one of the

members of the other team that had

checked on a noise that they heard while

3 – no communication on the K2 with the

communicating again to yes and no

questions while sitting at table, he says he

is scared again. He responded that he was

sitting next to Melanie. Melanie started

asking questions and he responded to her

with the K2 as well.

light on the wall in the 1st Dining room.

We went to investigate sounds in kitchen and

– 2-3 (normal for kitchen area with equipment)

room and bar area, K2 started going off at various

times with lots of communication to yes and no

questions, then stopped. Team 2 borrowed the

K2 to take down to Basement 1. They had no

Melanie felt a cold chill while standing near the

bar, temp and EMF readings were normal around

her, the feeling then subsided.

to yes and no questions very clearly

at the start of the investigation, liked our team, and

stayed with us throughout the investigation.

you make a noise?” A man made an audible

answer “no” in a whisper.

12:02 am – Private room upstairs from Basement

DVR was unplugged, Team 2 plugged it back

1:06 am – Started investigation again after small

singing when the team was singing.

ball that made her heart jump. Heard enormous

investigate, discovered it was a giant icemaker.

in far right hand corner of the basement.

of stairs. 5-10 min. prior, Christine saw a shadow

cross the top of stairs. Corey and Patrick saw

We were asked to investigate claims of

we were unable to debunk or confirm claims

of the glasses flying off the shelf and objects

location in the restaurant, the investigators had

some personal experiences of their own that were

Some of the personal experiences included, but

not limited to the following, while in the basement

areas there were sounds of some one running,

chairs being moved, and conversations going on

in the rooms above. Upon investigating the noises

we found no one in those rooms. We also tried to

recreate the noises, but were unsuccessful.

and one got nauseated as he enter one of the

rooms, the nausea feeling left when he exited the

Two investigators heard the clank of glasses but

we were unable to find the source. Audible

disembodied voices were heard and recorded with

were recorded, some were in response to the

investigators questions and others seem random.

One team received responses to their questions

via the K-II meter in three separate locations.

The EMF reading in the same areas were within

normal range. Nothing Paranormal showed up on

our still pictures but all the video data has not been

reviewed at this time. What has been reviewed has

not yielded anything Paranormal.

With the stories of paranormal activity from

of the investigators, and the EVP’s, along with

the K-II activity, we feel that Aqua Terra Bristo

is haunted. We also feel that there is nothing

malicious at the location and that the activity

includes both residual and intelligent activity.

warranted to find out more answers to questions

that were raised on this investigation.

Below is our investigation of the historic Morton Theater for Athens Ga. department of Public Relations. Their video won a national award and GOGPI is very happy to have been part of the video.

We are on the Bert Show on Q100 radio talking about our investigation of their producer’s home. Here is the show.